Making a Cover for In Obscurity's The Collapse
House artist In Obscurity approached me early in the album process to have me design a cover for their new album, The Collapse. The Collapse's story centers on a society which collapses because corporate greed led to the system which could have solved their problems never being activated. After discussing whether the focal point should be the system itself, rotting away in a lab somewhere, or the corporation which didn't activate said system, we landed on focusing on the corporation, as it felt more pressing to the story to put a concrete image for people to see what led to the system not being activated, rather than leaving it abstract. With that decided, I set about creating the cover you see above.
References
The first step was to gather some reference and inspiration material. For the art style, I wanted something just photorealistic enough to be believable, but certainly stylized. I knew we would be using architecture as a focal point, since the ability to use a building as a symbol was far too tempting, but the shape of the building was to be determined. For that, Moscow's Evolution Tower became my main inspiration, as its spiraling shape sent energy upwards; ours needed to do the opposite. For location, it made sense that the corporation which didn't care to stop the collapse would be one that wouldn't be affected by it, as in one far enough removed from the society to carry on. This meant they had set up deep in a mountain range. While the range in the cover is fictional, it's based on the Akaishi Mountains. In particular, the Akaishi's abundant pine trees and rocky-woodsy terrain made a perfect locale for the building.
Terrain 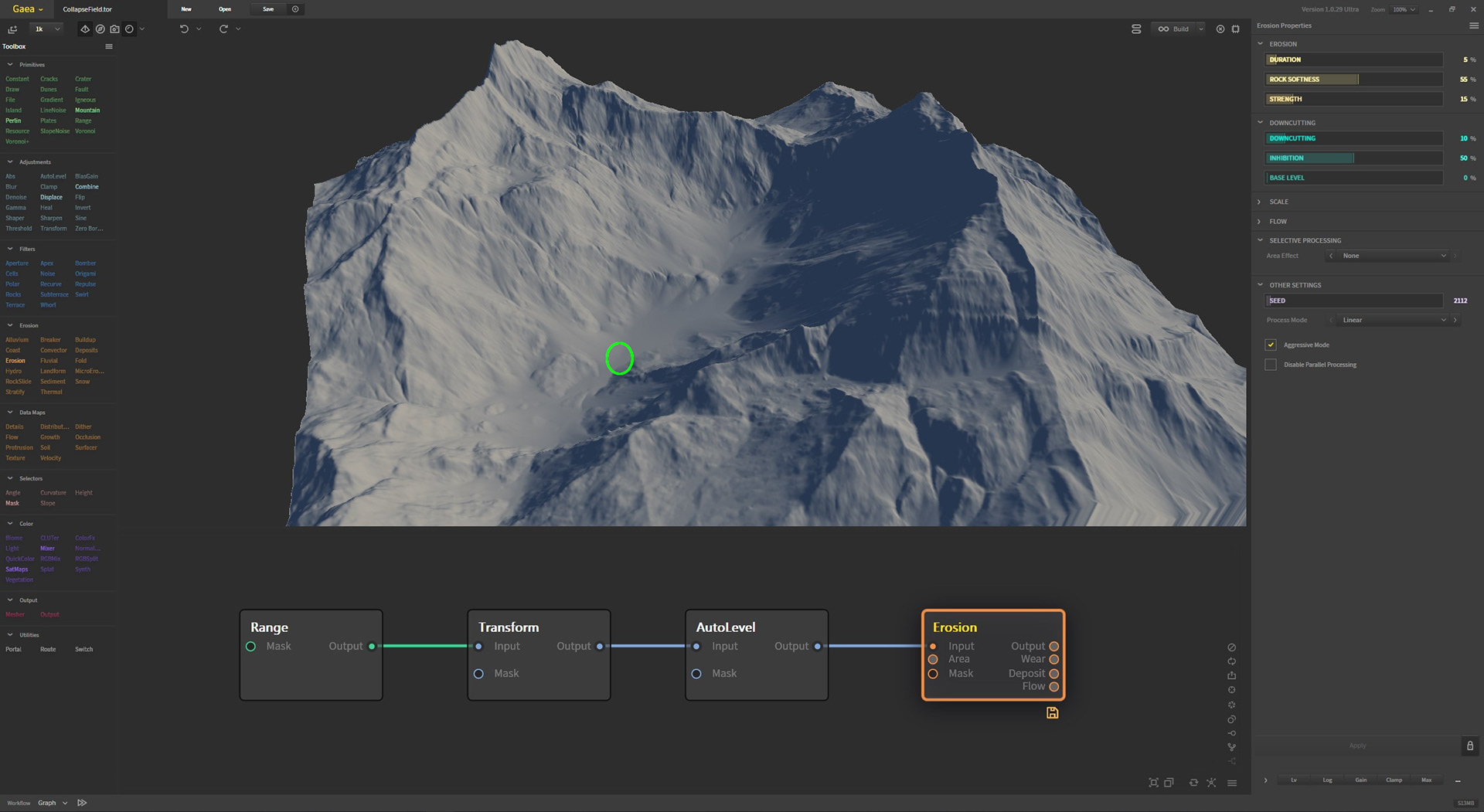 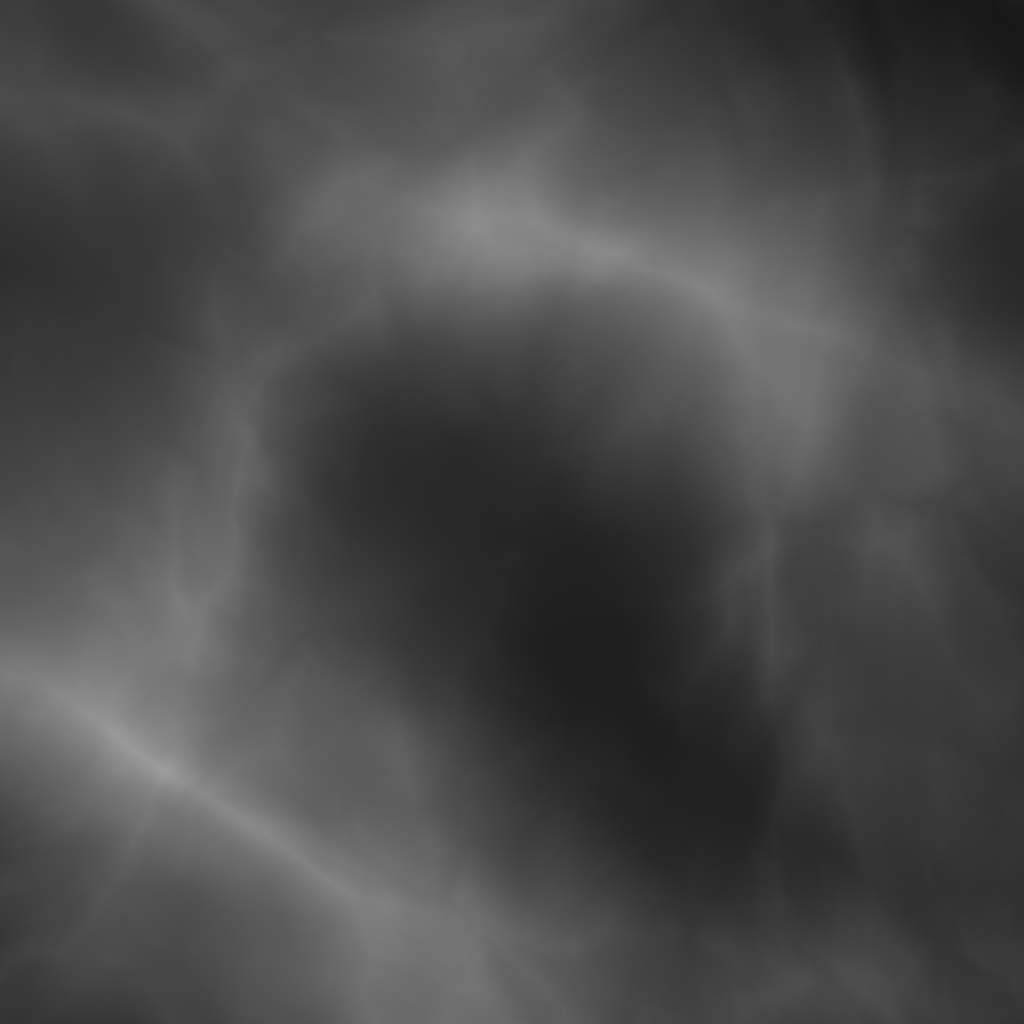 QuadSpinner Gaea made the task of creating a mountain range and clearing incredibly simple. The green circle shows where I set the scene. My Gaea setup simply generates a range, transforms it to show only the part I need, adjusts the height a bit, and erodes it. The erosion stage also output a Deposit map, which I used to drive the foliage distribution later. By this stage, I had already decided on a foggy cloudy night scene, so I knew not to waste time texturing the terrain -- it's going to be grey anyway.

Keep in mind the Unreal screenshots aren't necessarily chronological; they're just there to break down the scene components. Everything in Unreal was done at once.
Building 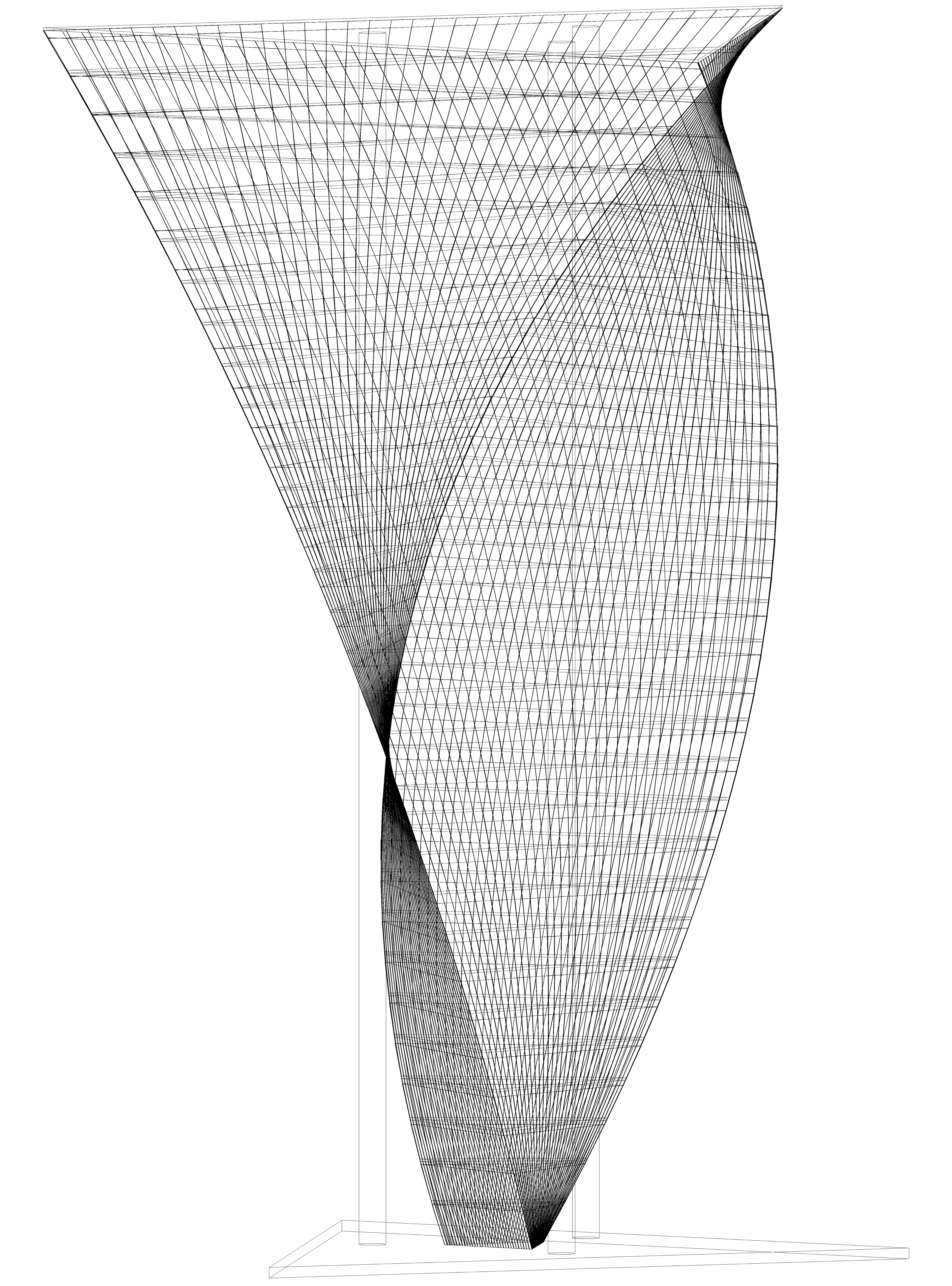 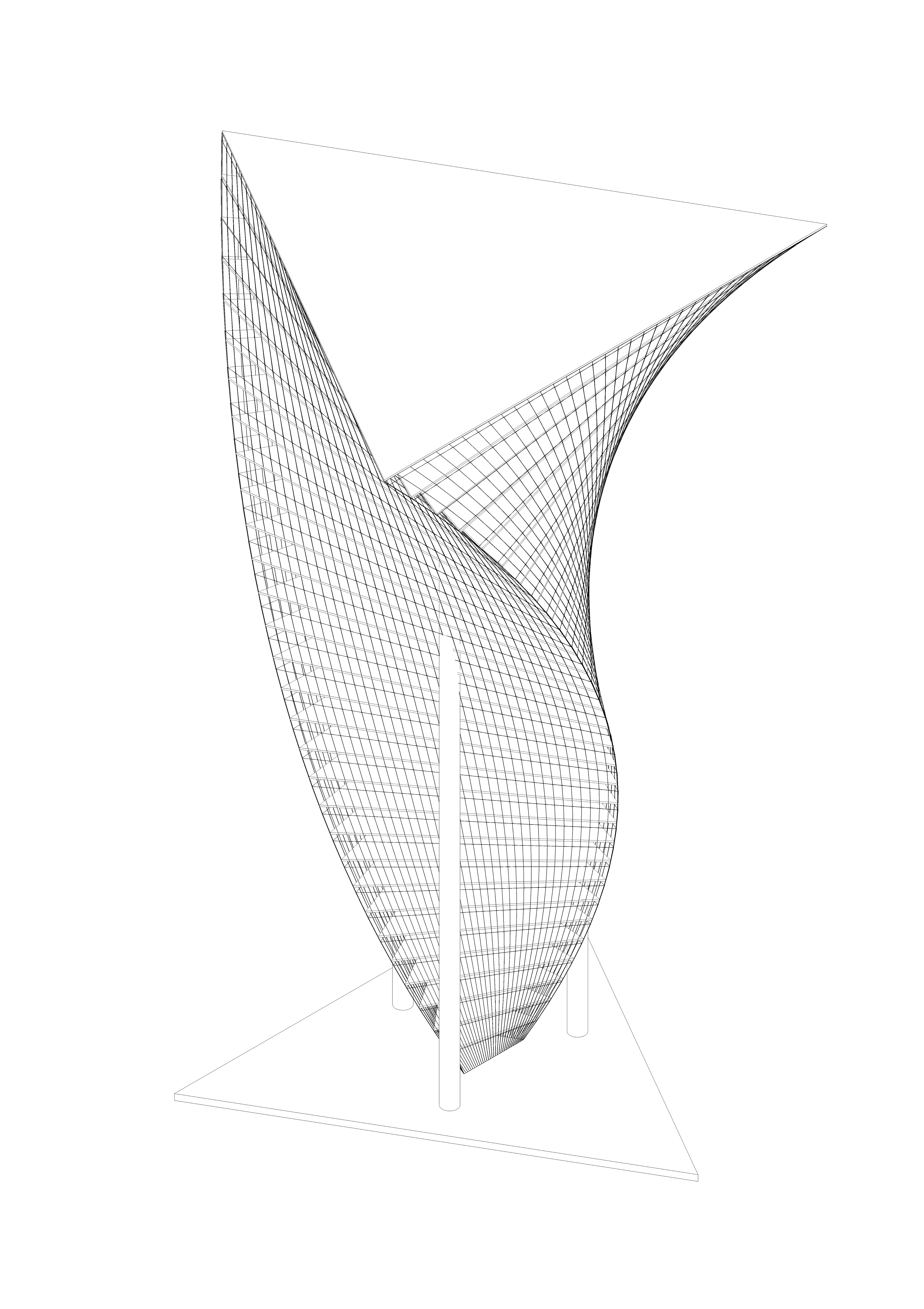 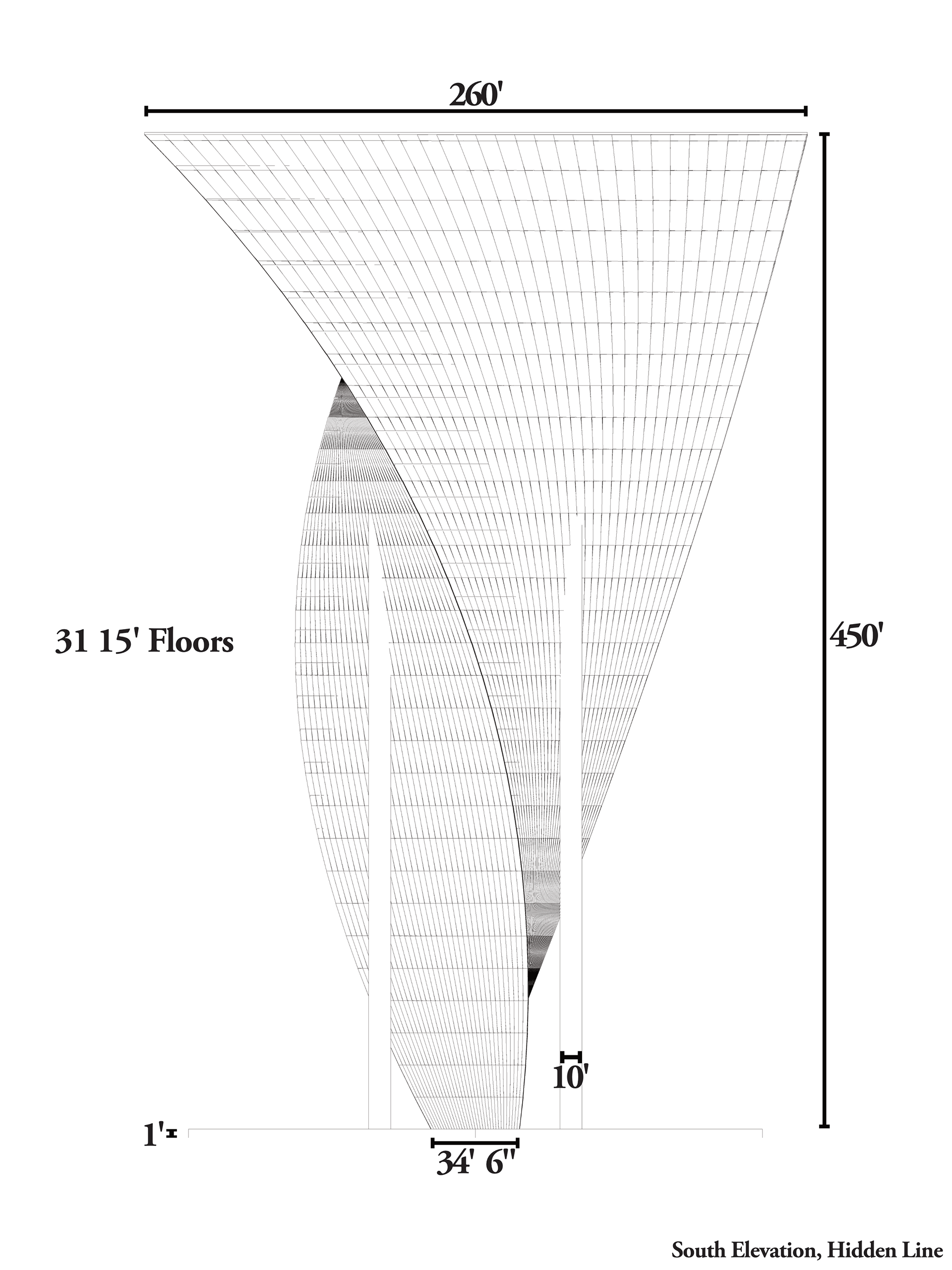 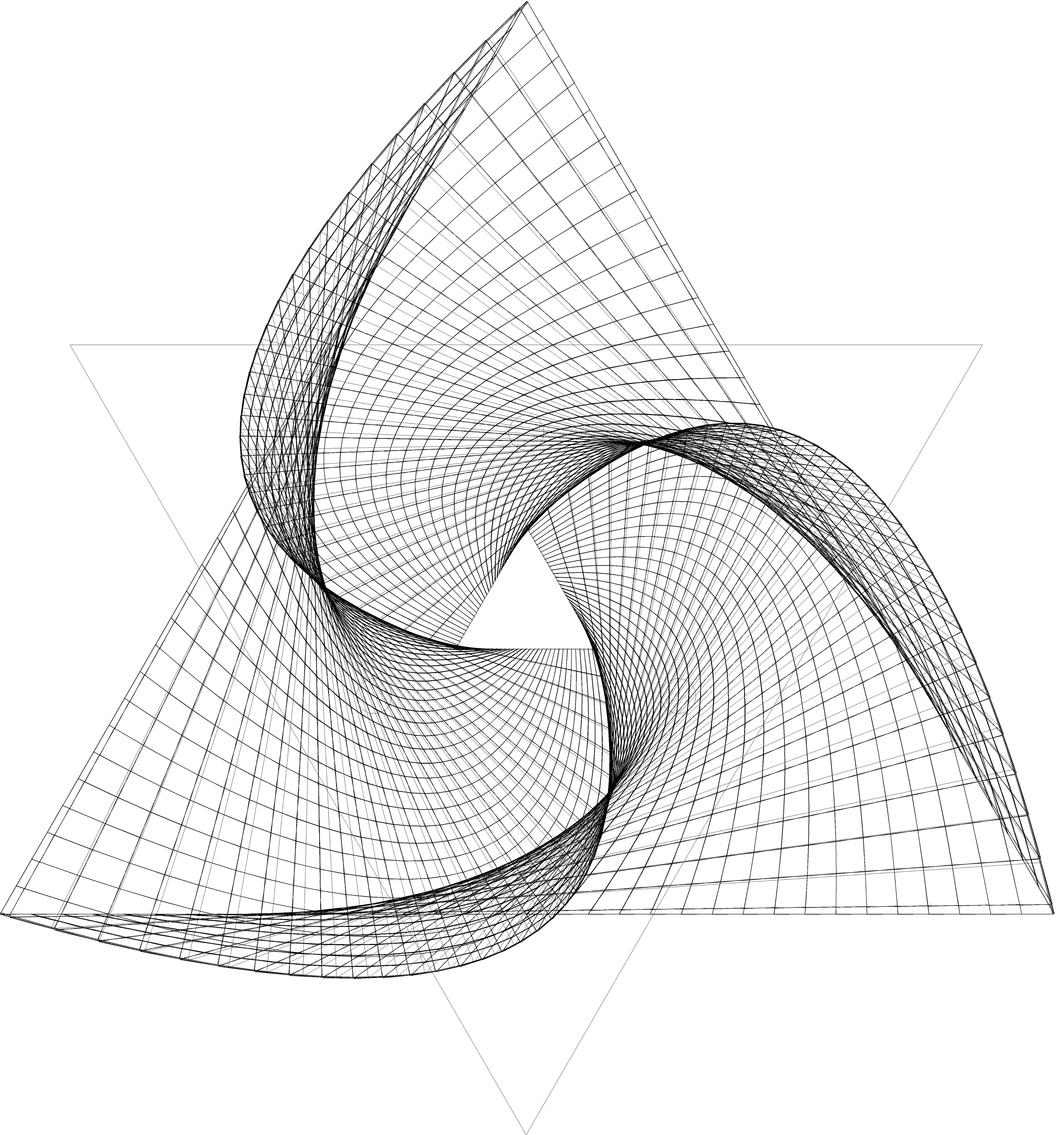 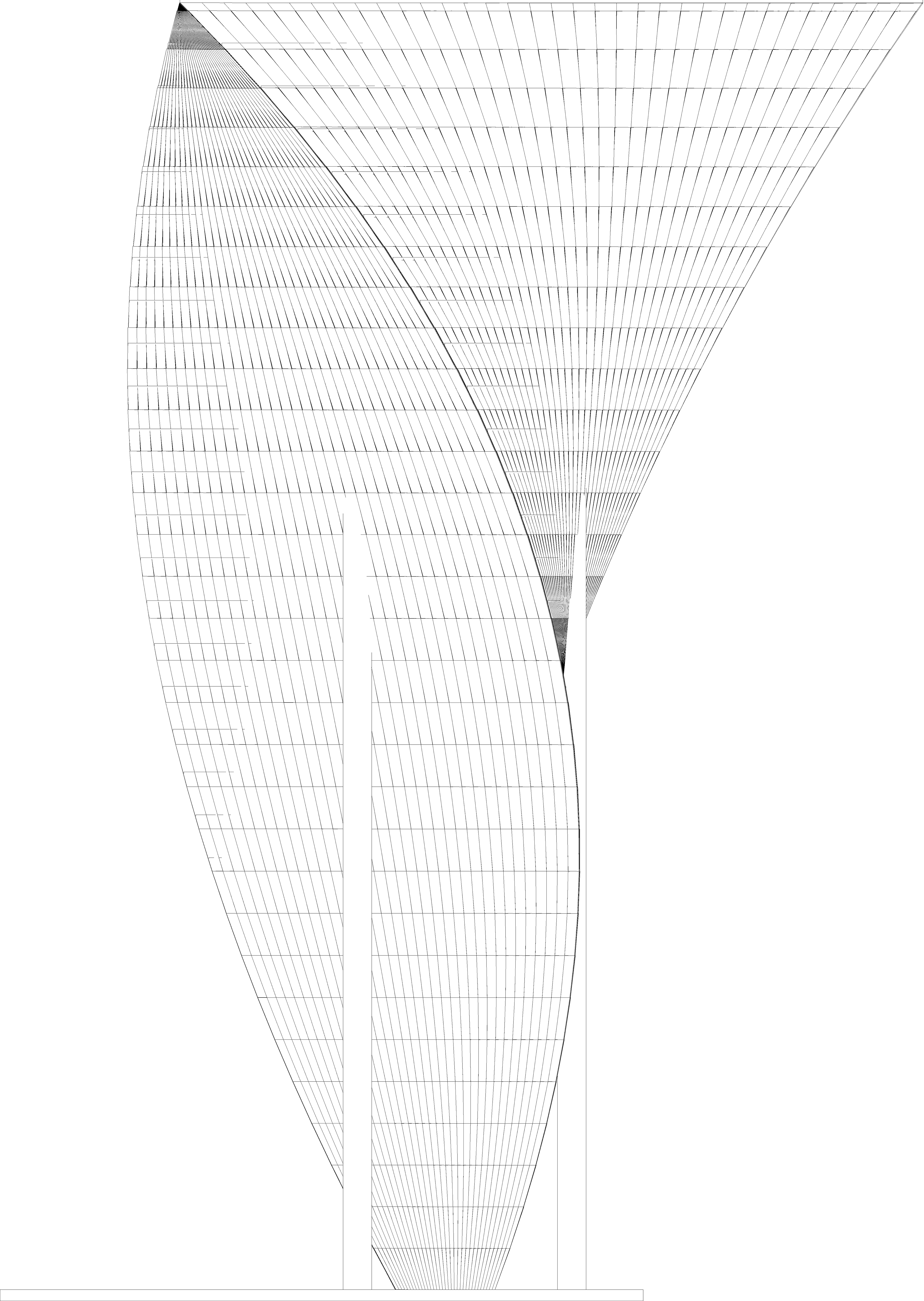 The building was the hard part of the cover. How to best symbolize this hypothetical corporation? For this, I turned to shape symbolism, especially that of the downward triangle. While it gives a sense of [downward] direction, it also seems unstable -- the perfect shape to base the building on.
While it was mostly unnecessary to use Revit here, it was much easier to create a physically-accurate to-scale version of the building and use Unreal Datasmith than it would have been to do it inside of another 3D package.
In addition to the "unstable" aspect contributed by the downward triangle, the twisted shape also brought a sense of unease to the building. Three 10' columns made the structure somewhat more believable, though the story is set in 2050 anyway. The massive scale of a 450' building in the middle of a mountain range was hard to express, but some scene building helped make it work. 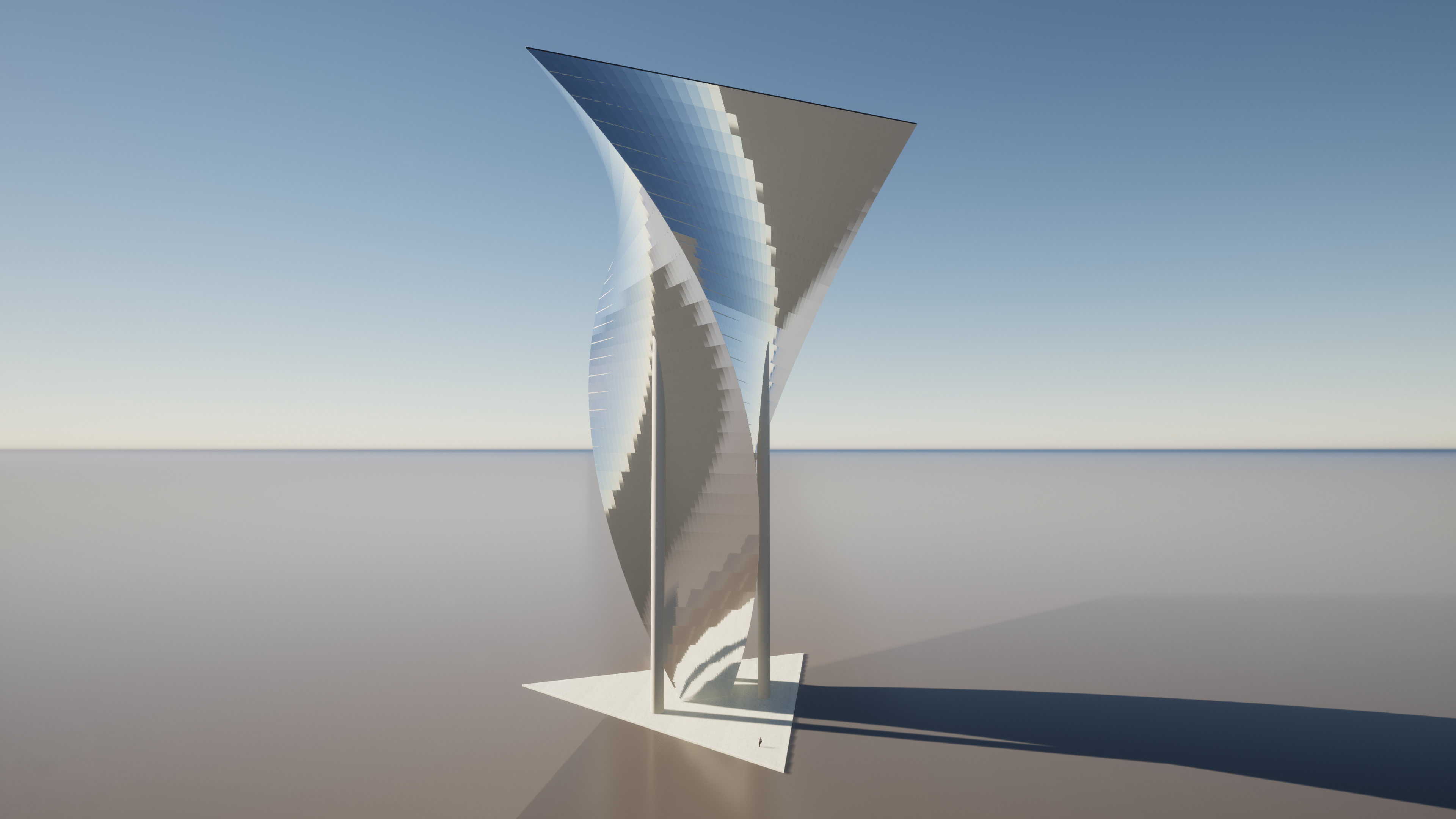 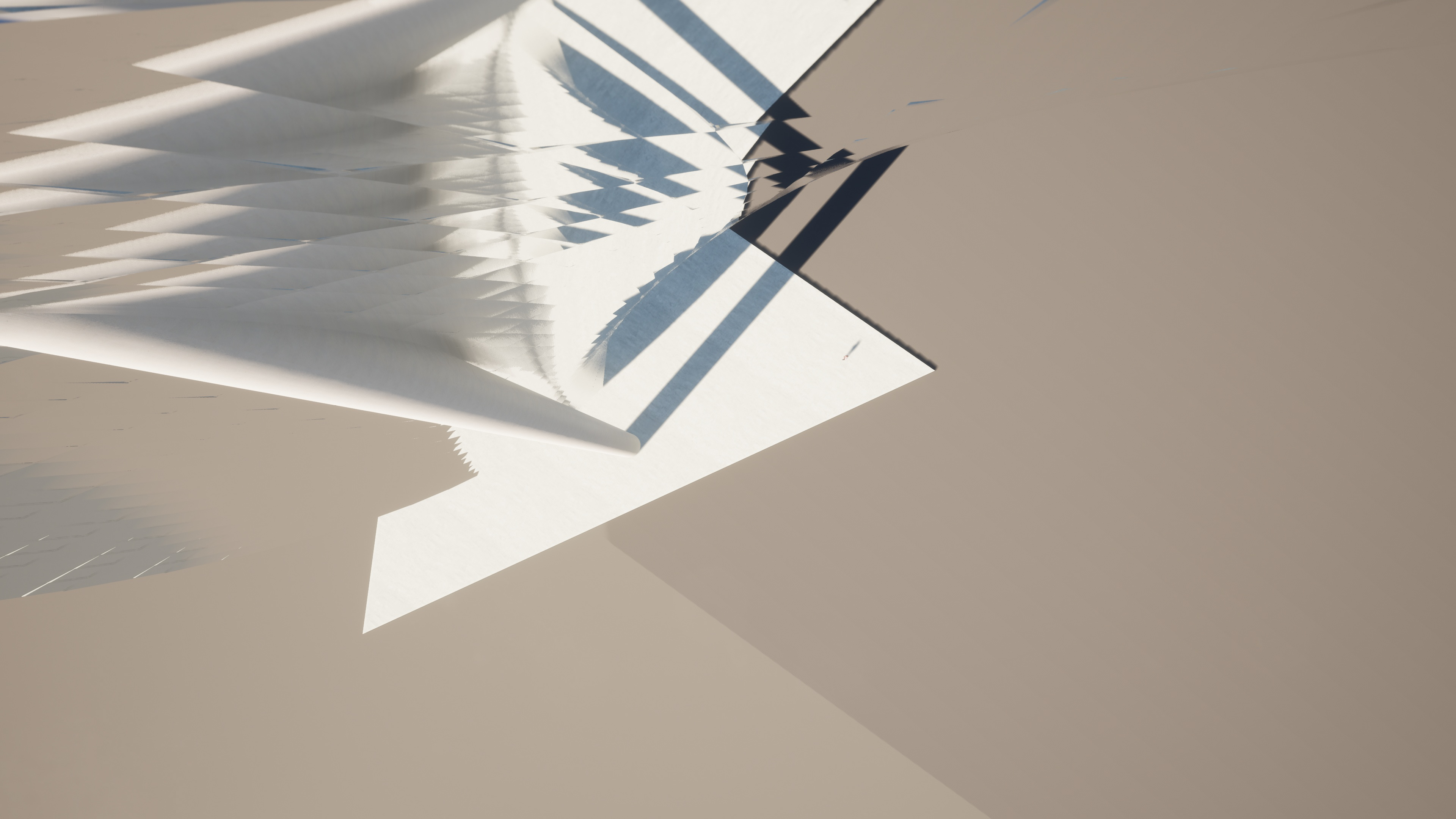 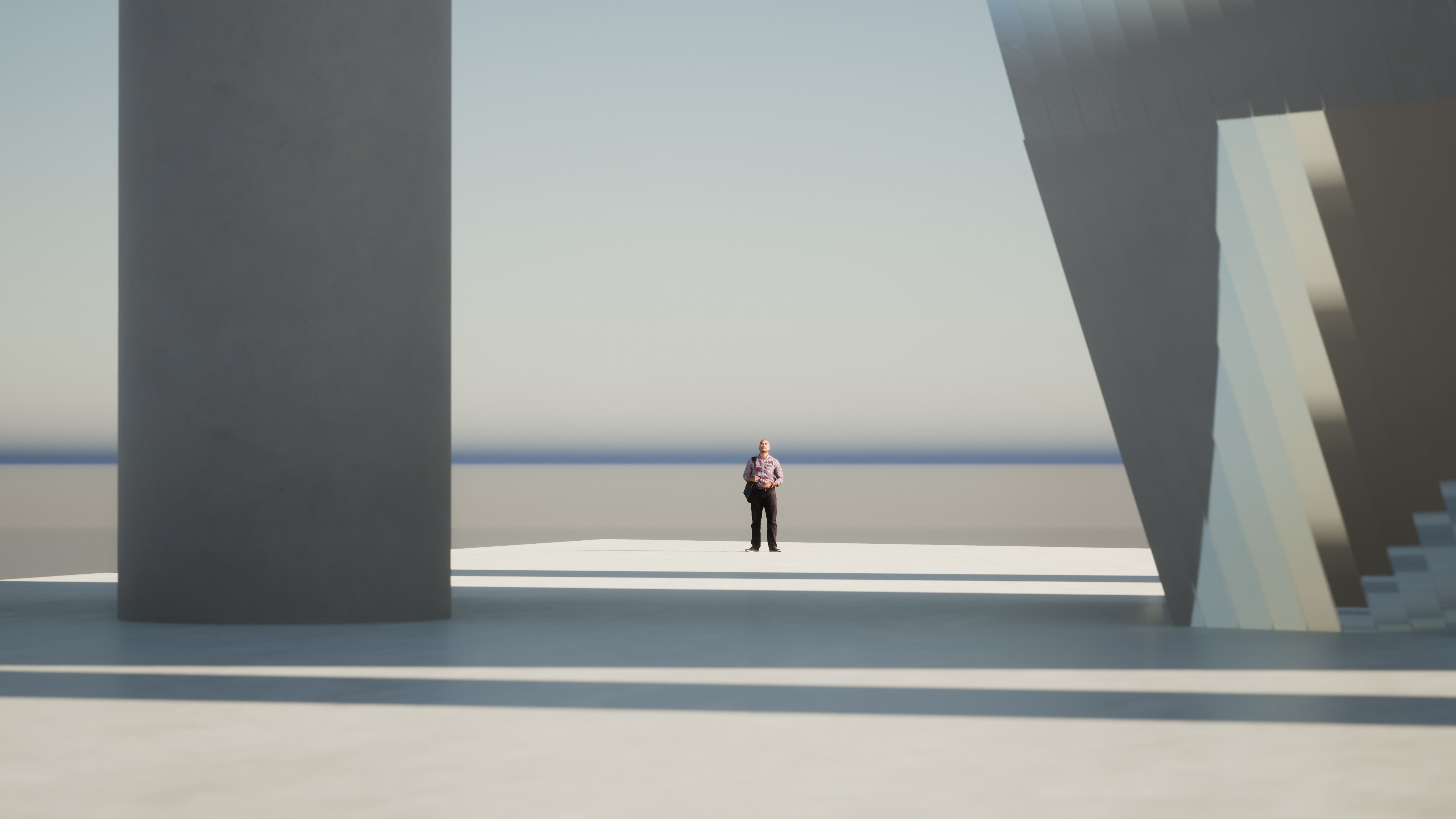 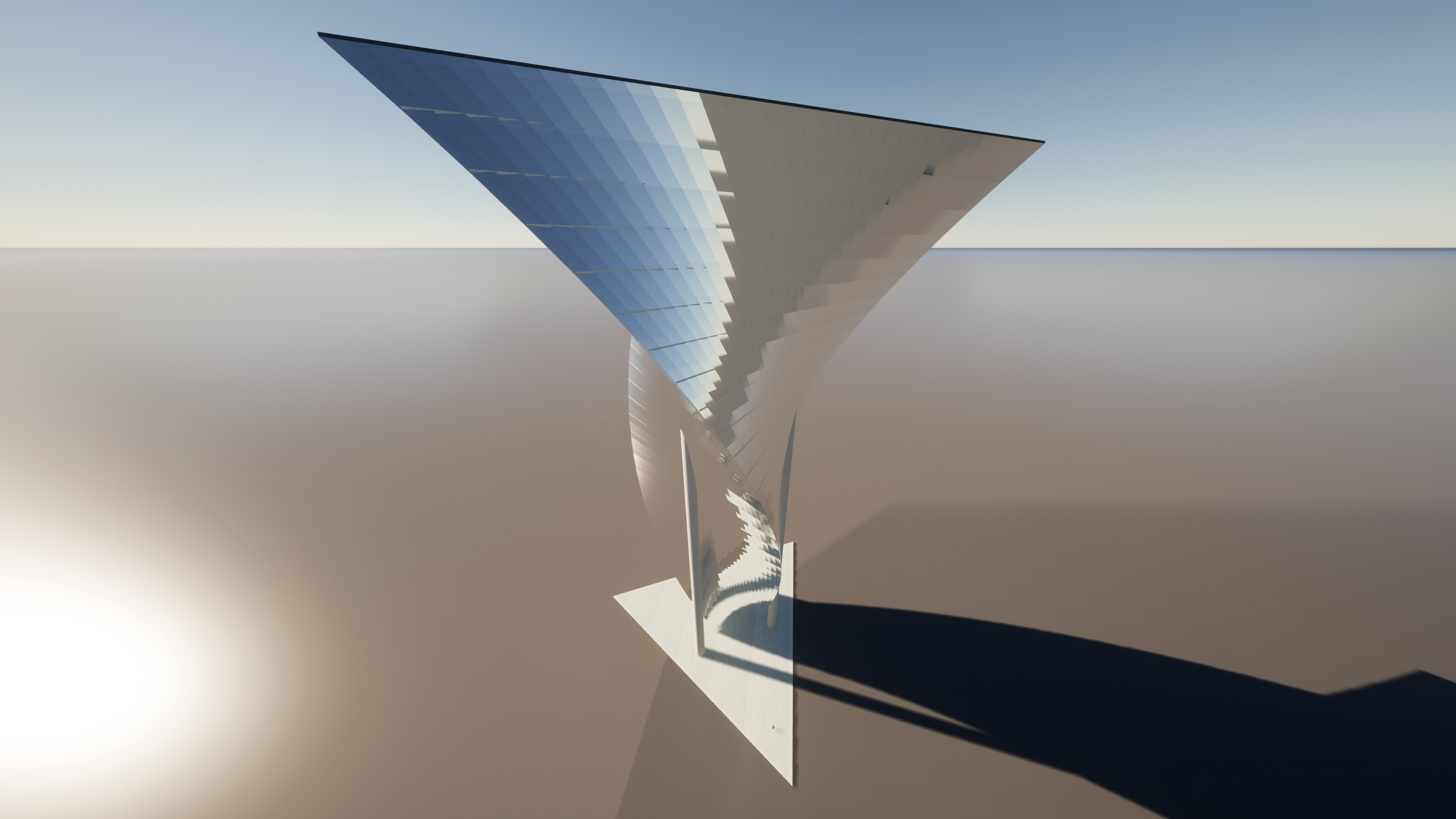 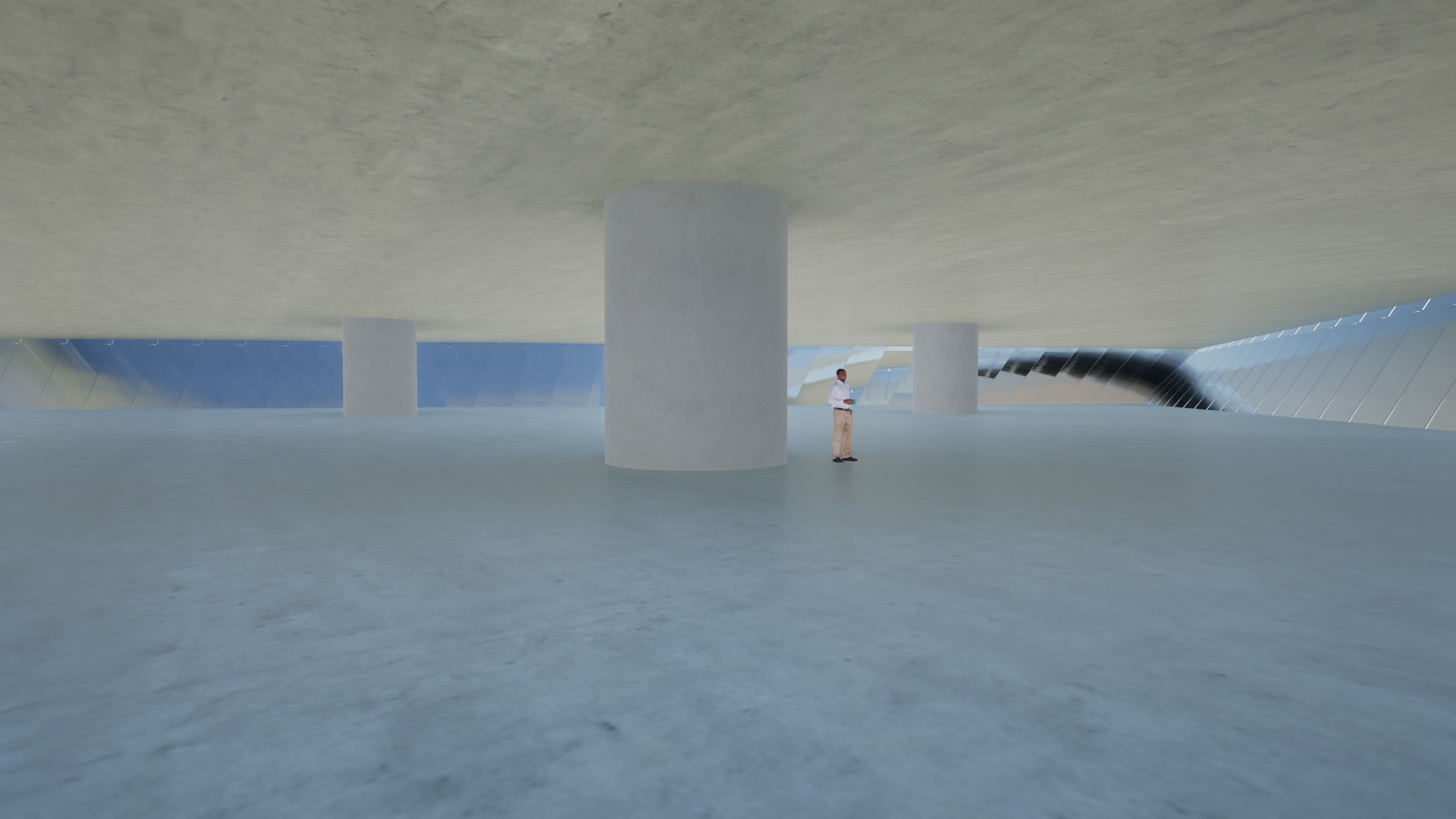 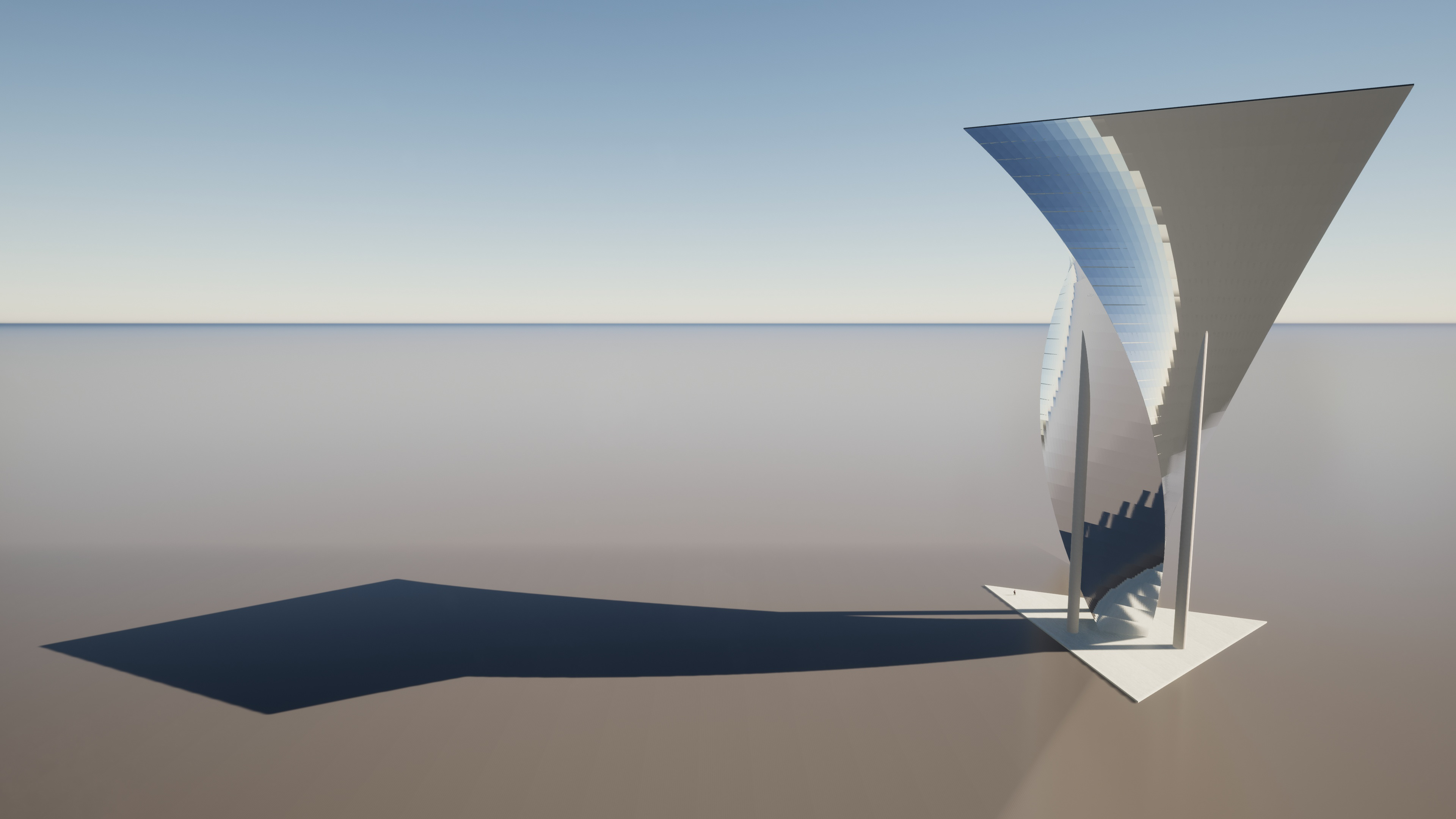 Trees from the Unreal Marketplace, distributed with the Deposit map from earlier, made it easy to build out a forest. Then, Megascan rocks and logs made the stage of building a believable clearing simple. Though it's almost invisible in the finished cover, a semi is parked near the entrance to the building to help establish scale. The semi is more prominently featured in the banner crop In Obscurity uses on Bandcamp.

The center of the frame felt barren, so I modeled a basic path in Blender and textured it with Quixel Mixer before bringing it into Unreal, enabling raytracing, and tweaking lighting to finish the scene. 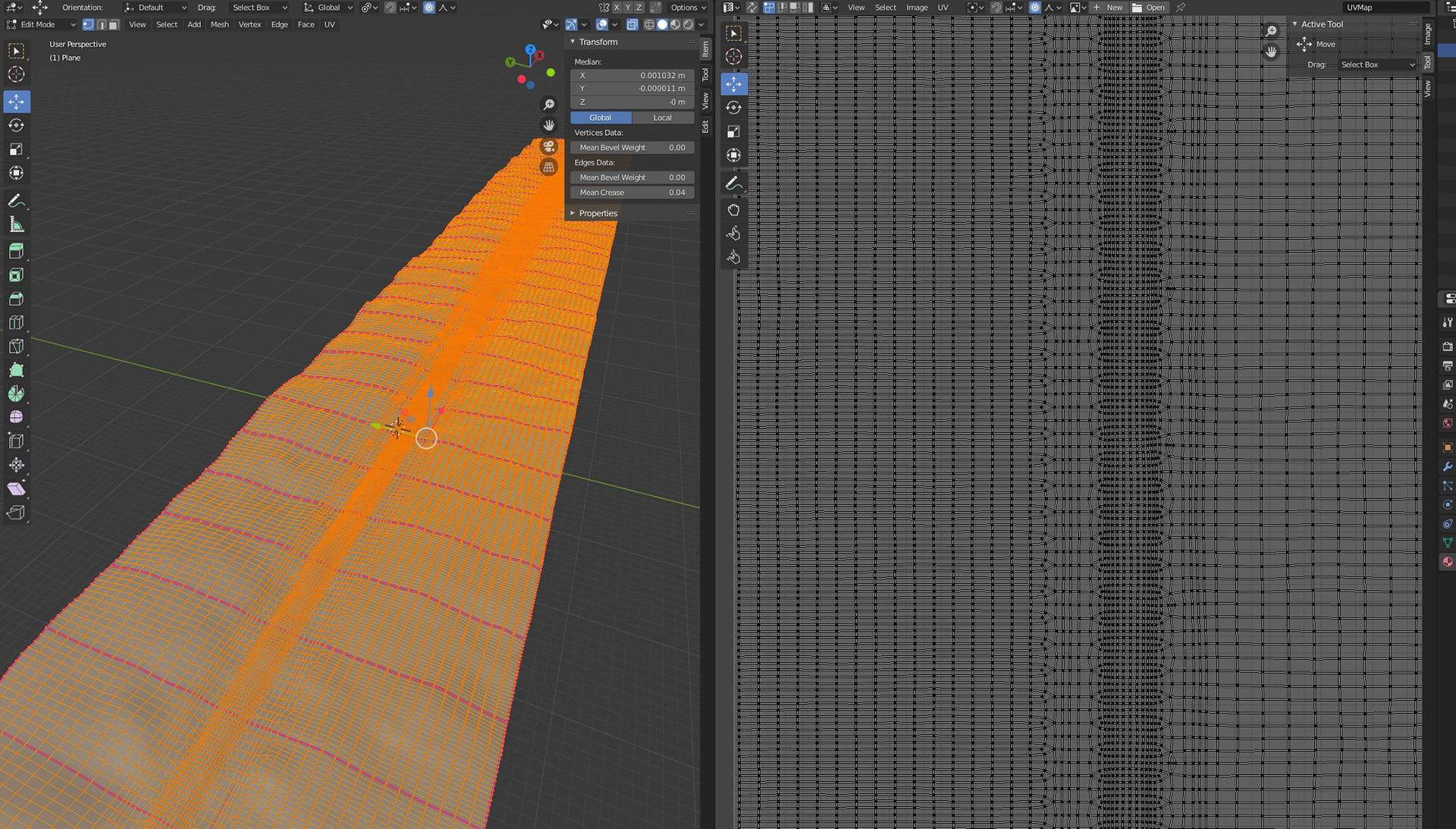 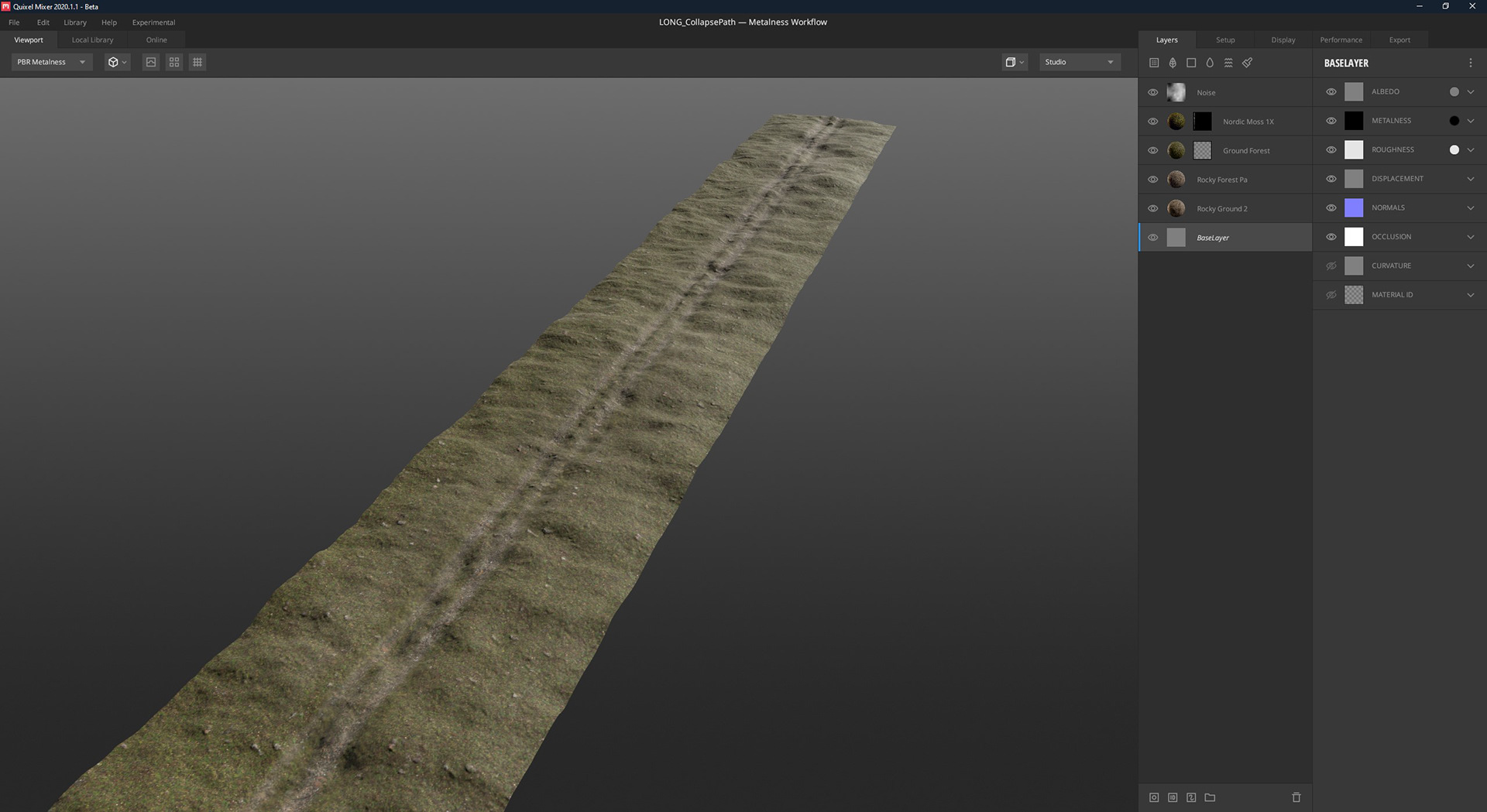 Much of the post processing was dedicated to fleshing out the art style and covering up some minor errors. I used Affinity Photo's LUT tools to create the blue and orange color scheme, then went around with the inpainting brush to erase any lighting errors. After some more exposure and lighting layers, the image was complete and all that was left to do was the text.

The artist wanted their name to be fittingly shrouded in obscurity, so in addition to the dark coloring, I added a slight lens blur to the end and used a subtract blend style to make it interact with the image more. Then, the cover was complete.

Conclusion
This project offered a great opportunity to use Unreal to create a stylized scene and practice using Revit with Datasmith to import a full tower at scale. While the scene itself is horribly unoptimized, the final image is one I'm happy with.
Here's to many more.
-Elias